I had a text from my brother at the beginning of August:  Just thought you’d like to know we took Mum out to the usual place for her birthday.  Lots of fun but possibly too much fun because she had a heart attack when she got home and now she’s in hospital.

Never one to avoid a bit of drama, my 79-year-old mother ended up being strapped to a board like a Hannibal Lecter murderous maniac, loaded onto a private plane by a fleet of firefighters and sent from Jersey Hospital to Oxford for an emergency triple bypass.  Heaven only knows what stunt she’ll pull for her 80th birthday.

So most of August, for me, was spent on the M25 and M40, dashing between the office,  pitta kitchen and hospital.  I am utterly traumatised, mainly from having to spend endless days trapped on a small ward of old biddies letching over the unsuspecting male black nurses.  Good grief.  Those poor blokes.

Normal life has resumed but I’m all out of kilter.  Being self-employed, I’m all out of money too.  But that’s character-building, right?  Hey ho.  Another two weeks of toil and we’ll have a cheeky few days in France.  If I can pretend to be French, I can pretend to be rich too, right?  I’ll just practise my shrugging for now.  C’est la vie, hein?

I’m steadfastly ignoring the heredity nature of traits… not so worried about my heart health but concerned that Boots know something I don’t judging by the label on their parcel..? Ooh ‘eck… 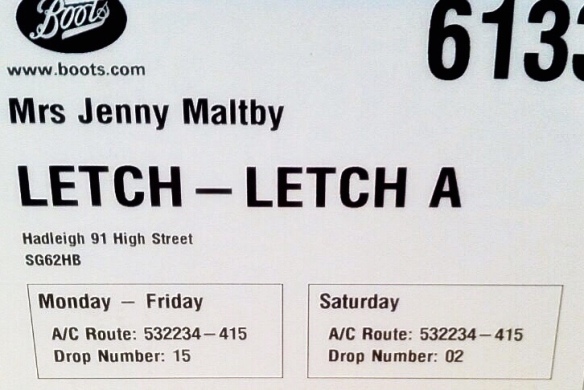